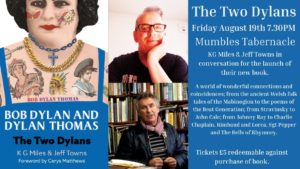 Come and join KG Miles and Jeff Towns for the launch of their fascinating new book – The Two Dylans.

There are many wonderful connections and coincidences; shared passions and associations that tie the two cultural icons, Bob Dylan and Dylan Thomas together which provides us with a rich tapestry of words – from the ancient Welsh folk tales of the Mabinogion to the poems of the Beat Generation; from Stravinsky to John Cale; from Johnny Ray to Charlie Chaplain. Rimbaud and Lorca, Sgt Pepper and The Bells of Rhymney, Nelson Algren and Tennessee Williams and much more.

“Why, you can’t swing a cat without hitting a Dylan … such are the inﬂuences of these two cultural giants. Why did Dylan choose Dylan as his name? Where do the worlds of these colossal culture vultures and wordsmiths collide? Some of the answers are found in the pages of this book and a lot more besides. I hope you enjoy the trip as much as I do.”

Tickets from shop – or HERE

A literary lunch with Heather Morris 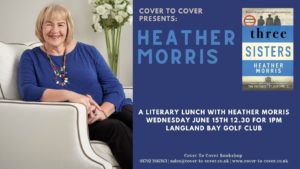 After a lengthy hiatus, we’re delighted to announce a return to our literary lunches with Heather Morris: author of the 8-million copy global bestselling phenomenon The Tattooist of Auschwitz.

Come and join Heather for a two course lunch, free glass of wine, and a signed copy of her latest book – Three Sisters, based on the incredible true story of the Meller sisters, as told to Heather.

When they are little girls, Cibi, Magda and Livia make a promise to their father – that they will stay together, no matter what. Years later, at just 15, Livia is ordered to Auschwitz by the Nazis. Cibi, only 19 herself, remembers their promise and follows Livia, determined to protect her sister, or die with her. Together, they fight to survive through unimaginable cruelty and hardship.

Magda, only 17, stays with her mother and grandfather, hiding out in a neighbour’s attic or in the forest when the Nazi militia come to round up friends, neighbours and family. She escapes for a time, but eventually she too is captured and transported to the death camp.

In Auschwitz-Birkenau the three sisters are reunited and, remembering their father, they make a new promise, this time to each other: That they will survive.

Rich in vivid detail, and beautifully told, Three Sisters will break your heart, but leave you amazed and uplifted by the courage and fierce love of three sisters, whose promise to each other kept them alive.

Livia, the last remaining sister, lives in Israel today, surrounded by friends and family. She, along with her sister Magda, (who passed away May 2022) chose Heather Morris to tell their story in her novel Three Sisters, a beautiful story of hope in the hardest of times and of finding love after loss.

Tickets available from shop (£32.50) including signed book, two-course lunch and glass of wine. Online tickets will incur a booking fee. 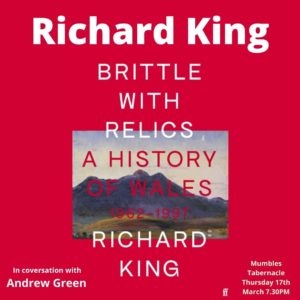 Come and join award-winning Faber author Richard King for the launch of his latest book: Brittle With Relics.

Brittle with Relics is a landmark history of the people of Wales during a period of great national change.

‘Richly humane, viscerally political, generously multi-voiced, Brittle with Relics is oral history at its revelatory best: containing multitudes and powerfully evoking that most remote but also resonant of times, the day before yesterday.’ David Kynaston

There is no present in Wales,

There is only the past,

In the closing third of the twentieth century, Wales experienced the simultaneous effects of deindustrialisation, the subsequent loss of employment and community cohesion, and the struggle for its language and identity. These changes were largely forced upon the country, whose own voice, rarely agreed upon within its borders, had to fight to be heard outside of Wales.

Brittle with Relics is a history of the people of Wales undergoing some of the country’s most seismic and traumatic events: the disasters of Aberfan and Tryweryn; the rise of the Welsh language movement; the Miners’ Strike and its aftermath; and the narrow vote in favour of partial devolution.

Featuring the voices of Neil Kinnock, Rowan Williams, Leanne Wood, Gruff Rhys, Michael Sheen, Nicky Wire, Sian James, Welsh language activists, members of former mining communities and many more, this is a vital history of a nation determined to survive, while maintaining the hope that Wales will one day thrive on its own terms.

‘A testament to the brutal circumstances that bonded the communities of Wales into a new polity for the 21st century.’

‘This book is a guide to remembering who we can be when we work together.’

‘An essential telling of Welshness that contains a powerful reflection of Englishness, too.’

Richard will be in conversation with Andrew Green, ex-National Librarian Of Wales, and author of Wales in 100 Objects.

The fifth novel from the author of the Richard and Judy bestseller Amy Snow. Perfect for fans of The Keeper of Lost Things and The Villa in Italy.

‘Tracy Rees writes from the heart’ Kathryn Hughes, author of The Letter. Perfect for fans of The Keeper of Lost Things and The Villa in Italy.

England, 1899. A new century is dawning, and two young friends are about to enter into a world of money, privilege and family secrets…
Josie has never questioned her life in a South Yorkshire mining village. But everything changes when she meets Tommy from the neighbouring village. Tommy has been destined for a life underground since the moment he was born. But he has far bigger dreams for his future.
United by their desire for something better and by their fascination with the local gentry, Josie and Tommy become fast friends. Wealthy and glamorous, the Sedgewicks of Silvermoor inhabit a world that is utterly forbidden to Tommy and Josie. Yet as the new century arrives, the pair become entangled with the grand family, and discover a long hidden secret. Will everything change as they all step forward into the new dawn…?.

Tracy Rees was born in South Wales. A Cambridge graduate, she had a successful eight-year career in nonfiction publishing and a second career practising and teaching humanistic counselling. She was the winner of the Richard and Judy Search for a Bestseller Competition and the 2015 Love Stories ‘Best Historical Read’ award.

Tracy will be in conversation with Sarah Rees.

Come and join the Bafta-winning creator of Keeping Faith for the launch of his new novel: The Black Art Of Killing.
KEEPING FAITH was one of the most-watched TV shows of 2018-19, accumulating 20 million downloads and becoming the most-viewed drama to ever be made by BBC Wales

THE BLACK ART OF KILLING combines the relentless pace, heart-pounding twists, and complex character-building that made it unmissable
Dr Leo Black is one of Oxford University’s rising stars. His lectures play to a packed audience of adoring students. He seems destined for tenure amongst the gleaming spires. But Worcester College has never employed a man like Leo Black before.

For twenty years Leo served the SAS with distinction. When the friend he served alongside is killed in Paris trying to prevent the abduction of a young British scientist, the world Leo has tried to put behind him begins to reel him back in.

Matthew Hall was educated at Hereford Cathedral School and graduated in Law from Worcester College, Oxford. He worked as a criminal barrister before getting his first screenwriting commission with the ITV hit series, Kavanagh QC starring John Thaw. He has since written over 60 hours of prime-time drama. In 2018 he won a BAFTA Cymru for his BBC series, Keeping Faith, which returns for a third and concluding season in 2020. He lives in Herefordshire with his wife Patricia Carswell. They have two sons.

Tickets £6.00 with £3.00 redeemable against price of book. Available from shop or Eventbrite

In the book, Jocelyn shares some of her experiences to raise awareness of this much-undervalued sixth-sense.

Jocelyn is a full time carer, winning a National Carers Award in 2014 for looking after her disabled husband and daughter. She is also an artist and jewellery-maker.

Come and join Rhoda Thomas for the launch of her latest poetry collection. Rhoda Thomas writes and reads poems regularly on Swansea’s vibrant, growing poetry circuit; a member of Wales’ Red Poets, she is also a founder member of Swansea-based Live Poets Society and a frequent contributor to public and street events and festivals. ‘I Turned Around And You Were Gone’ is her fourth solo collection. Rhoda will be signing, chatting and reading from 2PM onwards

We’re thrilled to announce Michael will be signing copies of his new novel: The Treatment, in-store Sat March 21st.

An incredible writer (with Mumbles connections), his first book was shortlisted for the James Tait Black Memorial prize.

‘A wonderful exercise in novelistic virtuosity, strange and beautiful’ – The Times Literary Supplement

Come and enjoy a literary lunch with the wonderful Joanna Trollope!

Joanna Trollope is the author of many highly acclaimed and bestselling novels, including The Rector’s Wife, Marrying the Mistress and Daughters in Law. She was appointed OBE in 1996 and CBE in 2019, a trustee of the National Literacy Trust in 2012, and a trustee of the Royal Literary Fund in 2016.

She has chaired the Whitbread and Orange Awards, as well as being a judge of many other literature prizes including chairing the BBC National Short Story Awards for 2017. She has been part of two DCMS panels on public libraries and is a patron of numerous charities, including Meningitis Now and Chawton House Library. In 2014, she updated Jane Austen’s Sense and Sensibility as the opening novel in the Austen Project. Mum & Dad is her twentysecond novel.

Their parents made a choice years ago. Now they’re counting on the children to step in. After so much time, can old wounds heal? Mum & Dad by the Sunday Times bestseller Joanna Trollope is a wise, brilliantly drawn examination of a modern family dilemma.

Ticket includes a glass of wine, a two-course buffet and a copy of Joanna’s new novel: Mum & Dad.

Tickets £32 including two-course buffet, glass of wine, and a copy of Joanna’s new book: Mum & Dad.

Available from shop and HERE

Pat Reid was born and brought up in Swansea and now lives on the beautiful Gower Peninsula.
She has been an animal lover all her life and has been involved in many animal rescues over the years.

Travelling in Asia in 2010 and 2011 brought her a new challenge – and a direction that was to change her life. Witnessing the terrible plight of many street dogs first hand was shocking and difficult.
“I felt so helpless in the face of such misery but I promised myself I would do something about it if I ever had the opportunity.”

“Adopting a Street Dog (The Story of Bruna and Me)” tells the very special story of Pat’s first year with Bruna, a street dog from Thailand. This is Pat’s first published work and proceeds from the sale of her book will be donated to Soi Dog Foundation, the amazing charity that brought Pat and Bruna together.

Pat will be chatting and signing copies of the book. 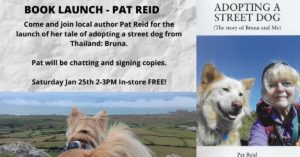