Come and join the Bafta-winning creator of Keeping Faith for the launch of his new novel: The Black Art Of Killing.
KEEPING FAITH was one of the most-watched TV shows of 2018-19, accumulating 20 million downloads and becoming the most-viewed drama to ever be made by BBC Wales

THE BLACK ART OF KILLING combines the relentless pace, heart-pounding twists, and complex character-building that made it unmissable
Dr Leo Black is one of Oxford University’s rising stars. His lectures play to a packed audience of adoring students. He seems destined for tenure amongst the gleaming spires. But Worcester College has never employed a man like Leo Black before.

For twenty years Leo served the SAS with distinction. When the friend he served alongside is killed in Paris trying to prevent the abduction of a young British scientist, the world Leo has tried to put behind him begins to reel him back in.

Matthew Hall was educated at Hereford Cathedral School and graduated in Law from Worcester College, Oxford. He worked as a criminal barrister before getting his first screenwriting commission with the ITV hit series, Kavanagh QC starring John Thaw. He has since written over 60 hours of prime-time drama. In 2018 he won a BAFTA Cymru for his BBC series, Keeping Faith, which returns for a third and concluding season in 2020. He lives in Herefordshire with his wife Patricia Carswell. They have two sons.

Tickets £6.00 with £3.00 redeemable against price of book. Available from shop or Eventbrite 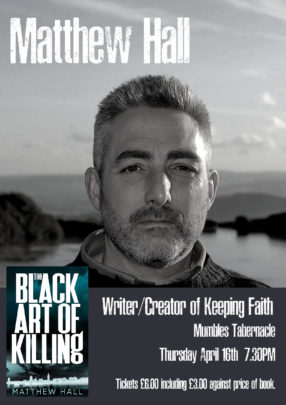