Come and join Stephen Hedges for the launch of his biography of his father: Bernard Hedges. Bernard played rugby for Pontypridd and Swansea, represented Great Britain at football, and was a widely respected cricketer with Glamorgan between 1950 and 1967.

‘Bernard was a true sportsman’ Don Shepherd
Truly, he was a hero’ Neil Kinnock
‘When it was my turn to face the bowlers, I often chose to be Bernard Hedges’ Sir Gareth Edwards

Bernard lived in Newton, Mumbles for the last 25 years of his life.

Stephen will be joined by broadcaster, commentator and ex-Glamorgan and Gloucestershire cricketer, Alan Wilkins.

Stephen and Alan will be chatting and signing copies of their respective books. 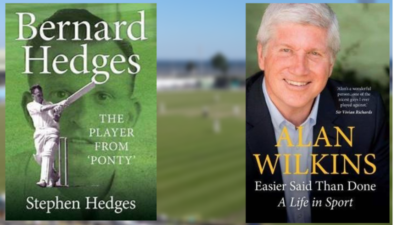