We’re really pleased to announce the UK launch of Peter’s latest book – America, Aeronwy, And Me.

In April 2008, Swansea poet Peter Thabit Jones and Aeronwy Thomas, the daughter of Dylan Thomas, crossed America, from New York to California, on the Dylan Thomas Tribute Tour of America. The tour was organised by Stanley H. Barkan, their American publisher and a poet, in conjunction with Vince Clemente, American poet and critic. As a result of one of their events in Manhattan, Catrin Brace of the Welsh Government in New York commissioned them to write the first-ever Dylan Thomas Walking Tour of Greenwich Village, New York.

Peter Thabit Jones has authored fourteen books. He has participated in festivals and conferences in America and Europe and is an annual writer-in-residence in Big Sur, California. A recipient of many awards, including the Eric Gregory Award for Poetry (The Society of Authors, London) and the Homer: European Medal of Poetry and Art, two of his dramas for the stage have premiered in America. His opera libretti for Luxembourg composer Albena Petrovic Vratchanska have premiered at the Philarmonie Luxembourg and the National Opera House Stara Zagora, Bulgaria. Love and Jealousy, a full opera, will premiere at the Theatre National Du Luxembourg in December.

The sky city of Valusha is now ruled by an evil overlord called Jenta-Lor. The former ruler and wizard, Obsidian has gone into exile, and has not been seen for many years.

There’s a weird band of misfits – a boy, an engineer and a wizard who have all been locked away in Skytraz Prison. No one has ever escaped from there – well it is thousands of feet above the earth. All seems hopeless.

But the wizard prisoner Rebus knows the layout of Skytraz Prison, so there just might be a chance to break out and get away. If so, can they find Obsidian, and what dangers are ahead?

Colin will be chatting and signing copies on the day.

Author of over 45 books, Tracey was born and grew up in industrial South Wales and now lives in a hidden valley in Gloucestershire with her husband, two children and an ever-increasing menagerie of devilishly-cute-but-sometimes-rather-naughty pets. A trained teacher, Tracey has always had a passion for wonderful literature and began writing for children in 2006. Her head is happily crammed with countless ideas and stories and she’s loving the adventures that her characters insist they share . . .

Come and join the award-winning, bestselling Clare Mackintosh for the launch of her latest book: After The End.

Clare’s first book I Let You Go was partly set in Gower (the fictional village of Penfach) and was a Sunday Times bestseller, also the fastest-selling title by a new crime writer in 2015. It was selected for both the Richard and Judy Book Club, and was the winning title of the readers’ vote for the summer 2015 selection, and ITV’s Loose Women’s Loose Books. Her second novel, I See You, is a number 1 Sunday Times bestseller, and a Richard and Judy Book Club pick. Clare’s books are translated into more than 30 languages.

Clare Mackintosh spent twelve years in the police force, including time on CID, and as a public order commander. She left the police in 2011 to work as a freelance journalist and social media consultant now writes full time. She lives in North Wales with her husband and their three children

Tickets £5.00 including discount against book.

Tickets available from shop and here

Join Mike Jenkins and Alan Perry for an exhibition of illustrations from their collaboration – From Aberfan t Grenfell.

Mike is the former editor of ‘Poetry Wales’ and was co-editor of ‘Red Poets’ magazine for 25 years. He’s the winner of several awards including : Eric Gregory, John Tripp Prize for Spoken Poetry & Wales Book of the Year for ‘Wanting to Belong’, a collection of stories set in a Valleys town.

Swansea artist Alan Perry is a poet, painter and short story writer. His writing has appeared in The Sunday Times, Poetry Wales, The New Welsh Review, Planet, Poetry London/Apple Magazine, Cambrensis, Roundyhouse, and many others.
It has been broadcast on both TV and radio, and in 1998 He was one of the subjects of a BBC2 documentary called “Sea Views”, and has been exhibited regularly in Swansea and Cardiff.

From Aberfan t Grenfell is a book of Mike’s poetry illustrated by Alan. Hand-coloured illustrations will be on display and Mike will read.

Come and join the author and illustrator of the Waterstones Children’s Illustrated Book of the Year! Lauren & Jenny will be reading, drawing and signing copies. To give it an extra family hometown feel, Swansea-born Lauren is the daughter of our very own Lynne!
Friendship is the fifth character in this beautiful story that charts the lives of four girls. This winning combination of Ace’s purposeful text and Lovlie’s charming illustrations provide a story that is brimming over with character and compassion. The overarching theme of inspiration is underpinned with a sweetness that encourages children and adults to return to and share this story again and again.
Lauren Ace is from South Wales, studied drama at the University of Exeter, and now lives in London, where she has worked in publishing for ten years. An award-winning publicist, Lauren looked after Julia Donaldson during her tenure as Children’s Laureate and has managed World Book Day campaigns and the announcement of Chris Riddell as Children’s Laureate. The Girls is her debut picture book. You can follow her on Twitter at @LaceyPR.
Jenny Løvlie is an illustrator and bird enthusiast from Ekkerøy, in northern Norway. She graduated with a BA in illustration and animation from Kingston University London in 2014. She draws a lot of inspiration from the Arctic landscape, flora, and fauna. Jenny is based in Cardiff, Wales. 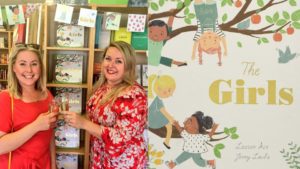 Come and join senior historian and local oracle Gerald Gabb for the launch of his latest book: Swansea And Its History, Volume II. Resplendent in three parts and housed in a handsome slipcase, this as close to exhaustive as will ever exist,

Gerald will talk us through its creation and contents.

Tickets £4 from shop or online here

A literary lunch with Ann Cleeves

Come and enjoy a literary lunch with the wonderful Ann Cleeves.

Ann Cleeves is the author of over thirty critically acclaimed novels, and in 2017 was awarded the highest accolade in crime writing, the CWA Diamond Dagger. She is the creator of popular detectives Vera Stanhope and Jimmy Perez who can now be found on television in ITV’s Vera and BBC One’s Shetland. The TV series and the books they are based on have become international sensations, capturing the minds of millions worldwide.
Ann worked as a probation officer, bird observatory cook, and auxiliary coastguard before she started writing. She is a member of ‘Murder Squad’, working with other British northern writers to promote crime fiction. Ann is also a passionate champion for libraries and was a National Libraries Day Ambassador in 2016. Ann lives in North Tyneside near where the Vera books are set.

The Long Call is the captivating first novel in a brand new series from Sunday Times bestseller and creator of Vera and Shetland,

Ticket includes a glass of wine, a two-course buffet and a copy of The Long Call (rrp £16.99)

We’re delighted to launch shop-friend and writer Jane’s first collection: The South Westerlies. Based in Llangennith, ‘Jane Fraser’s dark and unsettling debut collection of short stories explores the windswept Gower Peninsula of South Wales: a place of folklore and myth, birth and death, envy and revenge.’

‘Fraser’s stories are compellingly told and carefully crafted. She shares a heightened, acute sense of language with Annie Proulx and the right to comparison with such a prose stylist is properly won. And just as Proulx claims the lodgepole pines and wide-skied landscape of Wyoming as her own so too does Jane Fraser take the wind-flensed land’s edge of north Gower and make it hers. She has given this reader, at least, what he so often desires, namely the tang and sharpness of savouring language seemingly newly minted.’ —Jon Gower

‘The South Westerlies is obviously the work of a serious, committed and thoughtful writer, open to both inner and outer realms, the quivering sensitivities of the self, and the tactile, textured world outside, a kind of aesthetic elision between character and place.’ —Alan Bilton

‘The South Westerlies illustrate a landscape depicted with great specificity and detail, interfusing an exploration of place with the lives and perceptions of the characters who inhabit it… The stories display a sure grasp of the short story form and the techniques and processes of prose fiction… The collection is an original and valuable contribution to the literature of Gower and Wales.’ —Tristan Hughes

Tickets available from shop or here

Come and join the amazing Ed Clarke for the launch of The Secret Dragon: a heartwarming story of friendship and adventure – perfect for young explorers aged 8+. Readings, activities and more!

Mari Jones is desperate to be a real scientist, even though she’s only eleven. So when she discovers a tiny dragon while fossil hunting on the beach, she’s sure she can find a good scientific explanation – as long as she can keep it hidden long enough to study it.

Unfortunately for Mari, this is one secret that doesn’t want to be kept. And as she starts to form a deeper bond with the mischievous dragon, she might have to admit that, when it comes to friendship, science might not have all the answers…