We’re really pleased to announce the UK launch of Peter’s latest book – America, Aeronwy, And Me.

In April 2008, Swansea poet Peter Thabit Jones and Aeronwy Thomas, the daughter of Dylan Thomas, crossed America, from New York to California, on the Dylan Thomas Tribute Tour of America. The tour was organised by Stanley H. Barkan, their American publisher and a poet, in conjunction with Vince Clemente, American poet and critic. As a result of one of their events in Manhattan, Catrin Brace of the Welsh Government in New York commissioned them to write the first-ever Dylan Thomas Walking Tour of Greenwich Village, New York.

Peter Thabit Jones has authored fourteen books. He has participated in festivals and conferences in America and Europe and is an annual writer-in-residence in Big Sur, California. A recipient of many awards, including the Eric Gregory Award for Poetry (The Society of Authors, London) and the Homer: European Medal of Poetry and Art, two of his dramas for the stage have premiered in America. His opera libretti for Luxembourg composer Albena Petrovic Vratchanska have premiered at the Philarmonie Luxembourg and the National Opera House Stara Zagora, Bulgaria. Love and Jealousy, a full opera, will premiere at the Theatre National Du Luxembourg in December. 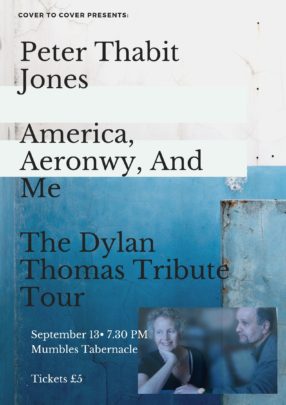